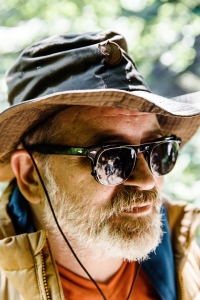 There can be few people less suited to a week-long Bear Grylls survival course than old Stella-boy here. But then that was precisely the point. When setting out to report the Hemispheres feature for October, I had i n mind one of those out-of-your-element first-person pieces, the kind that glean comedy from hardship and humiliation. Hey, look at the blobby middle-aged guy rappelling down a cliff! Ha ha!

That was the idea.

I did indeed get a chance to rappel down a cliff, right next to a 75-foot waterfall, into which I got sucked. I honestly thought I was done for—a lifetime of lager-drinking and pie-eating flashed before my eyes. In addition to the waterfall thing, I slept beside a bear trail, ate a live earthworm, wheezed my way up mountainsides and ankle-sprained my way down. It was absolutely bloody horrible.

On the plus side, I emerged from the experience a stronger and wiser person. For the first time in my life, I really feel like I know who I am, and where I fit in the world. I feel whole. Actually, none of that is true, but I did at least get to describe, in print, the moment when a female survivalist found me pooing next to a tree.